From the four corners  of the world, more than 1,500 dignitaries, including heads of state and the United Nations (UN) Secretary-General, Mr António Guterres, are converging on Accra today for the burial service of Mr Kofi Annan in what is expected to be a historic celebration of life.

Some of the heads of state attending the funeral are President Emmerson Mnangagwa of Zimbabwe,  George Weah of Liberia,  Alassane Ouattara of Cote d’Ivoire,  Hage Geingob of Namibia and Mahamadou Issoufou of Niger.

Others include the Angolan Vice-President, Bornito de Sousa; the former Queen of the Netherlands, Princess Beatrix; the Deputy Chief of the African Union Commission, Mr Kwesi Quartey; a former Prime Minister of Kenya, Mr Raila Odinga, the  National Assembly Speaker of Kenya, Justin Muturi; and South Korea’s former Ambassador to the United States, Choi Young, who is expected to lead a delegation from his country.

From the United States (US), the Under Secretary of State for Arms Control, Andrea L. Thompson, is leading his country’s delegation to the funeral.

According to officials of the Funeral Planning Committee, as a result of the large number of dignitaries expected and the limited space available at the Accra International Conference Centre (AICC), attendance will strictly be by invitation.

Ahead of the burial, President Akufo-Addo, yesterday, directed that flags should fly at half-mast today across the country.

According to the Deputy Minister of Information, Mr Pius Hadidze, the directive was to honour the memory of the iconic diplomat.

The remains of the man who headed the UN from January 1997 to December 2006 have been lying in a closed casket at the AICC since last Tuesday morning for mourners to pay their last respects.

Amid drumming, dancing and the performance of other rituals, tradition and culture took centre stage on the second day of the state funeral.

The day was reserved for government officials, Members of Parliament (MPs), the diplomatic community, judiciary, chiefs and other identifiable groups to pay their last respects but it was the unique tradition epitomised by the strict observance of rituals associated with Akan funerals that held sway.

Before the arrival of the chiefs, the diplomatic corps, former and present ministers of state, the Ghana Journalists Association (GJA), representatives from the Kofi Annan International Peacekeeping Training Centre in Accra, some security chiefs and members of the Mfantsipim Old Boys Association (MOBA) were also there to pay their last respects.

On reaching where the casket was placed, the Mamponhene removed his konponkye ( head gear) before stretching his right hand on the casket to signify the respect Asanteman holds for its proud son.

The Asantehene, in 2002, conferred the title Busumuru on the former UN boss. 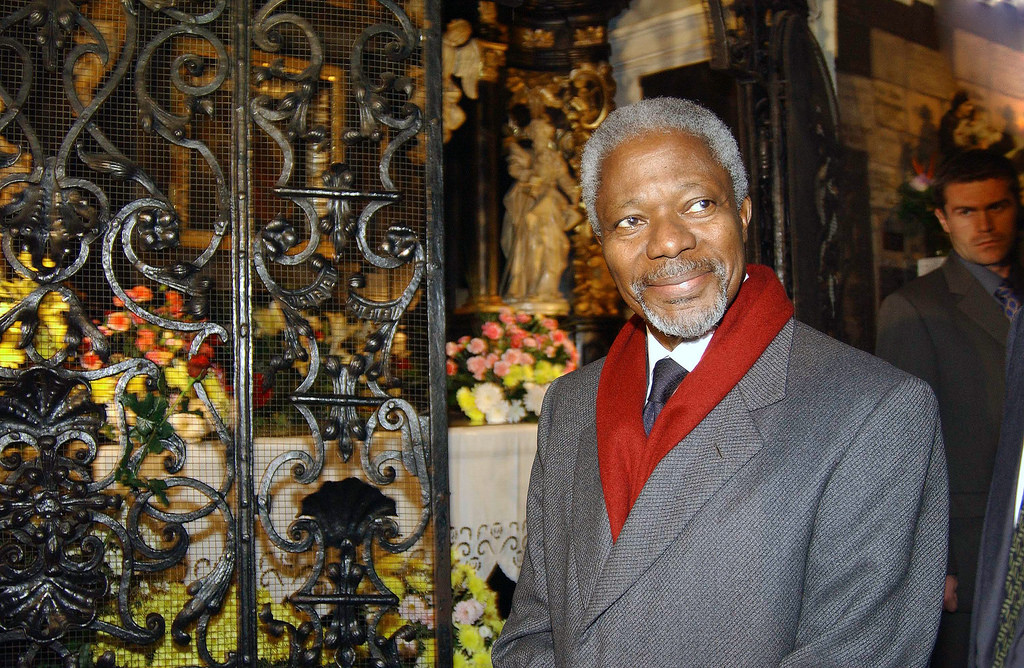 As tradition demands, both traditional delegations presented adesiedie ( burial gifts) made up of rings, pieces of cloth, drinks, native sandals and cash at the event.

The Minister of Sanitation and Water Resources and members of the funeral planning committee, Madam Cecilia Abena Dapaah, accompanied by the widow, Mrs Nane Maria Annan, welcomed Asantehene’s entourage to the grounds.

Members of the MOBA, ranging from classmates of Mr Annan to the present generation, sang a rendition of the school anthem to the admiration of the gathering.

Mr Roland Affail Monney, after leading members of the GJA to file past the body, told the Daily Graphic that the world had lost an icon.

Mr Monney described Mr Annan as a colossus whose tenure as UN Secretary-General changed the face of the international organisation in terms of world peace and prayed for his soul.

A former Chief of Staff under President J. A. Kufuor, Mr Kojo Mpiani, espoused Mr Annan as a humble and peaceful personality who would be missed by all.

The wife of the late Nelson Mandela, Madam Graca Machel, said Kofi Annan was not owned by Ghana alone but by the entire African continent and the world.

She expressed sadness at his passing but praised the late diplomat for his immense service to humanity.

In a tribute, the Asantehene, Otumfuo Osei Tutu II, recalled the 2001 Nobel Peace Award given to Mr Annan and the UN and said it was in recognition of his humility, selflessness and great contribution to humanity and the promotion of peace.

He explained that the title Busumuru, which is the name of the Golden Sword used by Asante kings to swear the oath of allegiance to the Asante kingdom at their coronation, was conferred on Mr Annan in recognition of his incredible work towards world peace.

Giving the significance of the sword, he said, it was fitting that Mr Annan became the first to be granted the title since the foundation of the Asante kingdom.

He indicated that after his sterling stewardship with the world body, Mr Annan did not rest on his oars but worked harder, excelled and soared to greater heights while collaborating with some world leaders and prominent personalities through his Geneva-based  Kofi Annan Foundation and other bodies.

“Busumuru continued to use diplomacy and advocacy to espouse causes, beneficial to the world in variety of fields with great passion and dedication, thus becoming one indispensable world leader and a moral compass of the world,” he stated.

Quoting Mr Annan, Otumfuo Osei Tutu said: “You can take a man out of  United Nations but you cannot take out of the man, the United Nations,” stressing that it was eloquent testimony to the high esteem in which the late diplomat was held globally.

The Asantehene stated that Busumuru was loved and respected by all who interacted and engaged with him and said the world was certainly poorer without Busumuru.

He further expressed his condolences to the wife, Nane, children, extended family, the Akwamu Stool and the entire country and the world.