Brazil snatched a late 2-0 win against Costa Rica in their second Group E game of the Russia 2018 World Cup.

The game which was highly contested by the two sides looked to be heading to a 0-0 draw until Brazil turned up in the last minute.

After a lame first half with few chances, Brazil were on an attacking mission from the blast of the whistle in the second half.

They created chances but failed to find the breakthrough.

They continued to attack and that paid off late in the game, in added time, Barcelona forward Coutinho, toe-poked the ball past Costa Rica goalkeeper Keylor Navas to give the Selecao the lead. 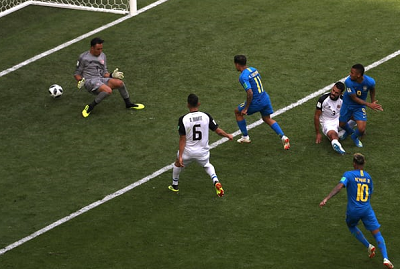 Brazil did not settle on the 1-0 lead and Neymar doubled the lead in the 97th minute after Douglas Costa laid the ball into his path.