Which players have run fastest at the World Cup this summer? We checked FIFA’s running stats to find out…

Despite being 33 years old, Portugal’s Cristiano Ronaldo has clocked the joint-fastest speed in Russia, hitting 34 km/h during his man-of-the-match performance against Spain.

Nearly 10 years his junior, Croatia forward Ante Rebic equalled the Portugal forward’s record-breaking dash during his side’s 1-1 draw with Denmark and also made a second sprint recorded at 33.3 km/h against Nigeria.

For context, those rapid speeds are around 10 km/h short of Usain Bolt’s world-record peak of 44.7 km/h at the World Championships in 2009.

Peru full-back Luis Advincula (33.8 km/ h) hit the third-fastest speed during his side’s 1-0 defeat to Denmark in the opening round of games in Group C.

Colombia right-back Santiago Arias (33.6 km/ h) has been the next most rapid player in Russia, edging pacy England duo Kyle Walker and Jesse Lingard (both 33.5 km/ h) during their last-16 clash on Tuesday night.

England are expected to attack Sweden with pace in the quarter-finals on Saturday, with Raheem Sterling, Marcus Rashford, Jordan Henderson and Dele Alli all clocking faster speeds than the Swede’s paciest star Ola Toivonen.

Check out the top 50 most rapid players in Russia below… 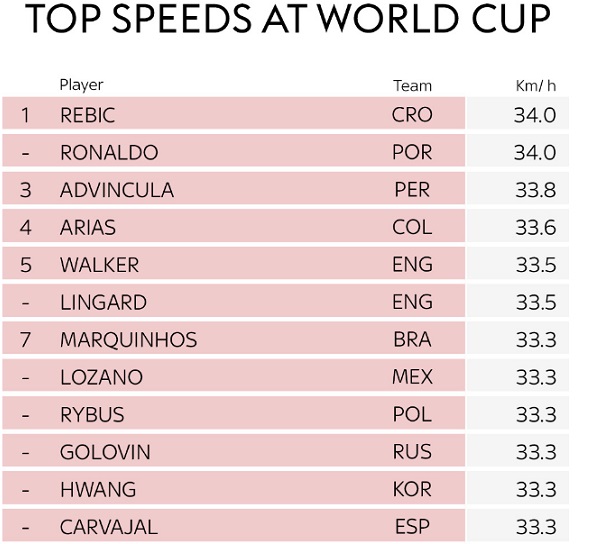